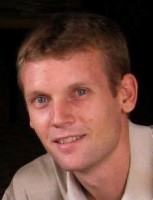 It is with overwhelming grief that we announce the unexpected passing of JEFF WARKENTIN at the age of 32years, on Saturday, September 24, 2011 at the Foothills Hospital in Calgary after an illness of less than one day.

Jeff was born and raised in Wheatley, Ontario, and lived most recently in Pincher Creek, Alberta. After spending six years in West Africa working with Mennonite Church Canada, Jeff and his family had recently returned to their home in Pincher Creek, where he had just begun and was enormously enjoying his new teaching assignment at St. Michael’s School.

Left with loving memories of a wonderful husband and father are his wife Tanya, (Tany Willms), daughter, Danika, sons Asher and Kenani; parents Paul and Ruth Warkentin of Wheatley, Ontario; parents-in-law Linden and Deloris Willms of Pincher Creek, Alberta; dearly missed by sister Sandra Warkentin of Leamington, Ontario; brother Joel (Andrea) of Burkina Faso, West Africa; brothers-in-law Shami Willms (Deanna) of Calgary, Topher Willms (Jeannie) of Pincher Creek; grandparents Jacob and Irene Froese of Leamington; seven nieces and nephews, many cousins, uncles and aunts, along with the numerous friends Jeff made wherever he lived, will miss him as well.

A Funeral Service will be conducted at the FOOTHILLS COMMUNITY CHURCH in Pincher Creek on Friday, September 30, 2011, at 2:30 P.M., with Pastor Harold Schilk, Officiating.