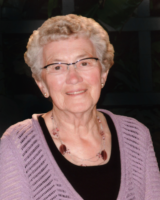 Elsie Thiessen
Dec. 7, 1926 – June 7, 2019
Elsie Thiessen (nee Funk), was born in the southern Alberta hamlet of Namaka in 1926 to Helena & Henry Funk. Although her childhood was filled with challenges, including the loss of her father and an illness that threatened her life, Elsie grew into a woman of great strength and character. She and Ben were married in Coaldale in 1949 and moved to Tofield in 1953, where they lived and farmed just west of town until moving into an apartment in 2006. Throughout her life, Elsie found joy in beautifying the yard and gardening, baking treats and pies to satisfy the sweet-tooths of Ben and her ever-growing family, and sewing. She was a woman of steadfast faith in Jesus Christ, who served wholeheartedly within the church for decades, especially in ministry among children.
Elsie was loved by many, and was profoundly grateful for the friends and relatives who visited her as mobility became a challenge in later years. She leaves to mourn her children, Ron (Marion), Leona (John) Wall, Ken (Connie), Mel (Thora), and Gary; as well as beloved grandchildren and their spouses, and more than 20 great-grandchildren, for whom she prayed daily by name. She is predeceased by her husband, Ben (2010); as well as grandson Kurt (1999); and daughter-in-law Evelyn (2016).
A memorial service will take place at 2:00 p.m., Saturday, June 15, 2019, at The House Ministries (5830 51 St., Tofield, AB). A private family interment service will take place at The Garden Cemetery.