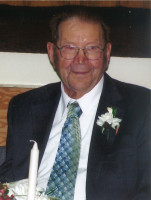 Mr. Jacob Siemens of Coaldale, beloved husband of Mrs. Regina Siemens passed away at the Chinook Regional Hospital on Sunday, February 8, 2015 at the age of 89, Jacob is now with his Lord and Savior.

Jacob was born in Lost River, SK on March 2, 1925. He worked for the County of Lethbridge for over 25 years as road grader operator.

A Graveside Service will be held at 1:00pm on Saturday, February 14, 2015 at the Coaldale Cemetery – Mennonite Section, Coaldale, AB.