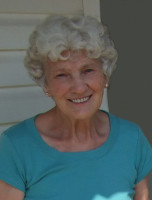 Mrs. Erna Siemens of Coaldale, passed away in Lethbridge on Saturday, July 25, 2015 at the age of 81 years.

Erna was born to George and Helen Barg, March 9, 1934 in Coaldale, Alberta where she lived for all but one of her 81 years. She attended school in Coaldale through grade 9, following which she was sent to work as a live-in housemaid for various families around Southern Alberta. She worked for a time at the Eaton’s lunch counter. On May 20, 1956 she married Peter C. Kopp and they raised four sons (two other children passing at birth). Erna was devoted to her family and was determined to raise sons who knew the values of honesty and hard work despite the limitations of living in town rather than on the farm. They were taught to do laundry, clean properly, help with cooking, and sent to find part-time jobs at 13, in the absence of real farm chores. Once the youngest son was in school, Erna re-entered the work force, first at a flower shop, then Prairie Meats, and then as a cook at the Coaldale Hospital, where she said “I worked for twelve and a half years doing what I love; messing around with food.” During retirement, Erna settled into doing things she loved most, such as blessing others through hospitality and hospital visitation.

Peter and Erna enjoyed 50 years together. Peter passed away in 2006. Erna did not adjust to being a widow very easily, as she had left all aspects of the household, except cooking, to Dad, and she hated driving. During this period, God blessed her with many friends who stood by her. She was both delighted and surprised when Leo Siemens contacted her. Leo and Erna were married on July 18, 2009 and they made a fresh start with great hopes and plans for adventure. These plans suffered a blow when Erna was diagnosed with cancer within five months of their wedding. This began a five and a half year journey that required all of her determination and strength. She passed from this life to the next on July 25, 2015.