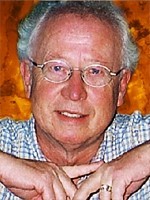 Dennis Schellenberg, beloved husband of Janice, passed away from cancer on Thursday, February 25, 2010 at the age of 67 years.

Dennis lived in Calgary since 1973, and was originally from Saskatoon, Saskatchewan. He came to Calgary to take a Controller position at a public organization and later moved into the telecommunications industry. Upon retiring he busied himself by earning a Financial Planning designation and spending time with his two young grandsons.

Dennis is survived by his wife, Janice, his daughter, Joelle, his son, Doug, Joelle’s husband Keith Chatwin, and his grandsons Evan and Deacon, all of Calgary. Dennis’ family outside Calgary includes; his sister Joan Hooper; his sister Betty Mayo; his brother Bob Schellenberg; his sister-in-law Peggy Schellenberg, and their respective families, and many other relatives predominantly in Saskatchewan. Dennis is predeceased by his parents John A. Schellenberg and Edna Schellenberg (nee Thiessen); and by his brother, Jack Schellenberg.

At Dennis’ request, there will be a private service for immediate family members only at this time, with a memorial service to be held at a later date to honour his memory.