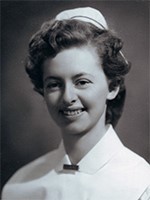 Elizabeth Sawatzky, beloved wife of Henry Sawatzky, passed away on Thursday, November 22, 2012 at the age of 88 years.

Born of Mennonite heritage in 1924, Elizabeth Sawatzky (née Reimer) immigrated to Canada from Ukraine with her parents in 1927 and spent her childhood years on a farm near Glidden, SK. Growing up in a remote community led her to discover the magic of a stamp at an early age and she developed her story-telling talents through letter-writing. In 1948, Elizabeth attained her R.N. from Saskatoon City Hospital and married Henry Sawatzky. Together they raised four children and Elizabeth enjoyed a nursing career for the next three decades. They savoured all aspects of prairie life and Henry’s involvement with the oil industry took them across southern Saskatchewan and eventually from Regina to Calgary in 1969. Elizabeth wrote award-winning poetry and short stories. She loved to travel, golf, work on needlecraft and, most of all, spend time with friends and family, especially at the Columbia Lake cottage.