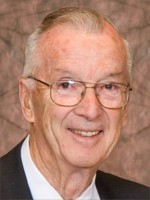 Edwin Regehr, of Calgary, passed away peacefully at Cedars Villa Extendicare on Saturday, April 2, 2011 at the age of 84 years.

Edwin was a wonderful husband, father and grandfather. He was fun loving and known for his humor and friendly, outgoing nature. He loved to travel and spend time with family and friends. Edwin worked for Investors Group for thirty-two years until his retirement in 1997. He was a friend to many. He was an active member of Dalhousie Community Church, and his strong Christian faith will be a legacy cherished by his family.

Those wishing to pay their respects may do so at McINNIS & HOLLOWAY’S Crowfoot Chapel (82 Crowfoot Circle N.W.), on Thursday, April 7, 2011 from 6:00 p.m. to 8:00 p.m. A Family Graveside Service will be held at Queen’s Park Cemetery. Memorial Services will be held at Dalhousie Community Church (5511 Baroc Road NW), on Friday, April 8, 2011 at 1:30 p.m. You may forward condolences through www.mcinnisandholloway.com. The family would like to express their deep gratitude to the staff of the Maple Ward at Cedars Villa for the wonderful care they provided for Edwin during the past two years.