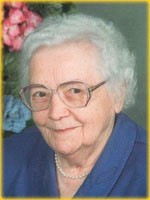 Mina Pauls of Calgary passed away peacefully early in the morning at the Forest Grove Care Centre on Tuesday, February 17, 2004 at the age of 89 years.

Mina was born on October 12, 1914 to David and Wilhelmine Ratzlaff in Deutsch Wymyschle, Poland and married Peter in Wymyschle, Poland on March 8, 1941. Mina and Peter made their home in Calgary for over fifty years. Mina was a competent business person and she enjoyed going to church, singing, playing guitar, crocheting, and gardening. She was a founding member of the Highland Mennonite Brethren Church and volunteered her time at the Mennonite Central Committee Store. Mina traveled many times to the United States, Germany and Paraguay. She is deeply loved and will be sadly missed by her family and friends.

Funeral Services will be held at the Highland Mennonite Brethren Church (4018 Centre B Street N.W.) on Thursday, February 19, 2004 at 1:30 P.M. with Pastor Harry Heidebrecht officiating. Graveside Service to follow at Queen’s Park Cemetery.