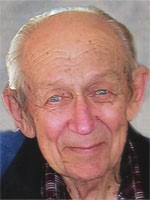 Abram Pauls beloved husband of Margaret of Airdrie, passed away on Friday, June 27, 2008 at the age of 83 years.

Abram enjoyed woodworking, music and leatherwork. He owned and operated his own real estate company Bowmont Realty for over ten years. Abram was known as the official gopher catcher of Airdrie. He also was an artist who was partial to sketching in pencil. His sense of humour came through late in life and was something he enjoyed immensely.