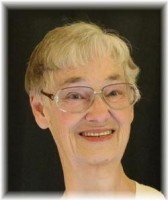 Betty Neufeld (Enns) of Gem, AB, much loved wife of the late Henry Neufeld, went to be with her Lord and Savior on May 21, 2015 at the age of 75 years. Betty was born in Rosemary, AB to Peter and Kathrina Enns on Nov. 5, 1939. She lived in Gem most of her life although in 1945, her dad sold the farm and moved to Sardis, BC for part of a year before moving back to Gem. Then in 1954, Betty got Polio and lived almost a year at the Red Cross Hospital in Calgary. After high school, she took a secretarial course in Calgary and worked there until she married Henry on Oct 21, 1961. They lived on the Elevator road in Gem before moving down the road to their farm in 1974. At Easter 2015, they moved to the Newbrook Lodge in Brooks. Betty worked part time and then full time at the Gem School from 1977 – 2001 as a librarian, secretary, teacher’s aide and general “go to” lady. She was also involved in the ranching and farming with Henry. Betty was on the County of Newell Library Board for many years, volunteered with the Gem Ladies Auxiliary, Gem Public Library and actively involved with the Gem MB Church. Betty will be remembered for her deep love for her family, her treasured friendships and her strong work ethic. Betty was predeceased by her husband Henry on May 12, 2015; father Peter in 1955; mother Kathrina in 1976; her brothers, Pete and Jake and sisters Mary and Kay. She is survived by her loving daughters, Donna Doerksen and her husband Gerry of Calgary and their children Graham and Nicole; Jan Lepp and her husband Steve of Rosemary and their daughter Courtney and Joanne Cundict and her husband Mark of Red Deer and their children Elizabeth, Katherine and Tom; sister Marge Bekker; sisters-in-law Wilma Neufeld and Mary Enns; brothers-in-law, Walter Regehr, Rudy (Sue) Neufeld and George (Glenda) Neufeld and numerous nieces, nephews, cousins and extended family members. Funeral services will be held on Thursday, May 28 at 2:00 PM at the Gem Mennonite Brethren Church. Pastor Les Riediger officiating. Internment at the Gem Cemetery.