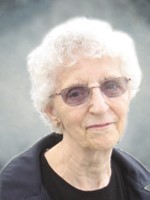 Helen Loewen went to be with her Lord and Saviour Jesus Christ on September 2, 2011 at the age of 77.

Helen was predeceased by her husband George, her parents Peter and Tina, and her brother John.

Helen was born in Grunthal,Manitoba on October 29, 1933 and grew up on the family farm.  Helen and George were married in Winnipeg in July, 1955, and celebrated their golden wedding anniversary in 2005.  They moved to Edmonton in 1959, where Dale was born in 1962.  They also spent five years in Grande Prairie, where Denise was born in 1965, before returning toEdmonton.  As her children grew older, she returned to work and had a long and successful career with Toronto Dominion Bank.  After leaving the bank, she continued to stay busy with volunteer work.  After George’s passing in 2006, Helen retired and moved to Calgary to be near Dale and his family.  She made many new friends in the apartment building where she lived, and had the opportunity to travel to various parts of the world with friends and family over the years.  Helen had a kind and loving heart.  She enjoyed being the hands and feet of Jesus to those around her, and she will be dearly missed by her family and all who had the privilege of calling her friend.

Since we have been justified through faith,

we have peace with God through our Lord Jesus Christ,

into this grace in which we now stand.