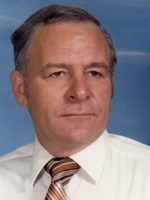 Gerhard “Hardy” Loewen, beloved husband of Ferne of Calgary, AB died peacefully in his sleep on Friday, April 12, 2013.
Gerhard grew up on the family farm near Springstein, MB. A career in teaching took him to various parts of Manitoba; Ailsa Craig, Ottawa, Ontario; Richmond, Quebec and Calgary, Alberta. Gerhard retired in 1996 after fifteen years with CBE at Montgomery and Bishop Pinkham Jr. High Schools. He always went the extra mile for all his students. Family was his first priority and most recently it was his grandchildren who brought him the utmost joy. He was a wonderful son, brother, husband, father, uncle, grandfather and friend to all. Many thanks to all who helped Ferne care for Gerhard in the last seventeen years at many Calgary Hospitals and Long Term Care Centres, including Wentworth Manor.

Hardy was predeceased by his parents Wilhelm and Sarah; his sisters Elly and Gerta; his brothers Bill and Ernie; his brothers-in-law Peter and Ernie and sister-in-law Lillian.