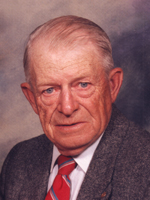 Daniel was born in Rosthern, Saskatchewan to German Mennonite parents that immigrated to Canada from Russia in 1924. The family moved to Alberta shortly thereafter and, in 1929, settled in Gem, Alberta. After completing his grade school education in Gem, he spent one year at Rosthern Junior College before joining the Bank of Nova Scotia. The bank sent Daniel to work in the bank branch in Arrowwood, Alberta, where he met his wife-to-be, LaDonna June Culp. The two were married on December 8, 1951 in her parents’ home in Arrowwood. Shortly after, Daniel’s career with the bank took the couple to a series of towns in the British Columbia interior, where their two sons were born. The family moved to Edmonton in 1960 and finally settled in Calgary in 1967. In Calgary, Daniel and LaDonna became active members of Brentview Baptist Church and were involved in a number of ministries there. Daniel remained a well-respected employee of the Bank of Nova Scotia until he retired in 1987.

Daniel is survived by his sons, Brian (Loeke) and Grant (Leslie); and his four grandchildren, Jennifer, Elizabeth, Stuart, and Heather. Daniel was predeceased by his loving wife LaDonna in 2010; his three brothers, John, Jacob, and Henry; and his sister Margareta.