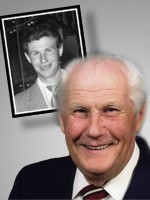 Henry was born in Gnadenfeld, Ukraine and passed away February 8, 2011 on his 80th birthday.

He is survived by his wife and life long partner Johanna (Jo) of fifty-two years, also his children; Carol and Leo (Brenda), and four precious grandchildren; Andrew, Briana, Timothy, and Matthew.

He was predeceased by his parents Anna and Jacob Herfort, sister Anna Dechant-Unger and his brother Jacob. He will be remembered for his hard work as a cement finisher for over forty years. He could be counted on to help when anyone needed it. He enjoyed peoples company, even in the last days of his life, he still had many good conversations. He will be missed by all who loved him.