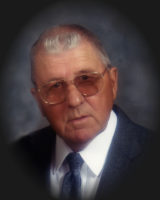 Jack finished his earthly Journey at the Sunny South Lodge on November 27, 2016, and went Home to be with his Saviour.

He began his Journey at Fortier, Manitoba on January 12, 1931– the third of three children. His parents; Nicolai and Maria (Reimer) Dyck, were fairly recent immigrants from Russia.   His early years were spent on his parents‘ farm learning the value of hard work .  He received his education in the Wingham Consolidated School in Manitoba near the small town of Elm Creek.  His horse, Jim, was often his mode of travel.  He liked to remember Jim as a dependable companion.  The schoolyard also played an important role in youthful entertainment.  There was baseball in the summer and in the winter a large area was flooded to accommodate hockey.  Throughout his life hockey was always a great favourite, whether he was playing or watching.

The Wingham Mennonite church also played a large role in his life. Many people in that church influenced his life and many good memories were made there. He remembered worshipping in a home in the years before the church building was constructed.  An early Sunday school teacher gave him a little wooden dog house and a porcelain dog with puppies that he has treasured for all these years.  A visiting missionary taught them a little song in one of our First Nations languages that he remembered all his life as well.  There was choir singing and Young People’s, and that was where he was baptised.  He also sang in a male quartet comprised of young men from that congregation.

When the Peter Abrahams family moved into the district he discovered a lifelong friend in their son, Henry. As they grew they retained many of the same interests.  Riding their motorcycles around the countryside just the two of them or with a small group of friends was one of those interests.

Then he discovered Henry’s younger sister Lena. On June 28, 1953 they were married in that same Wingham church.  Nearly five years later in February 1958 their only child, a daughter, Joyce was born.

Their life together was one of many moves while Jack built a resume of a wide range of jobs and skills. A wheeler-dealer nature was revealed as he bought, refurbished, and then sold a succession of both homes and vehicles. No matter how fond he might have gotten of a car or truck it was always for sale!  The small profits he made from each sale tided the family over those periods when a seasonal job would leave him temporarily without work. Jobs ranged from being a nurse at the Portage la Prairie Mental Institution to driving a cream and eggs transfer truck to working for the Manitoba Dep’t of Highways as an asphalt inspector. He owned a towing business at one point and did much of the towing for the Charleswood RCMP detachment.  He certainly became a “Jack-of-all-trades”.  He was never without work for long.  In 1971 they moved to Calgary where he managed a mobile home park.  In 1979 they moved to Lethbridge.  He found a number of different jobs, once again working for the Dep’t of Highways, this time for Alberta.  As he came closer to retirement he found employment with the Lethbridge parks system.  He especially liked this job, and discovered that he had inherited his mother’s “green thumb”.  He and another employee were responsible for the planting and care of the garden known to residents of the area as the Rose Bowl.  The seasonal nature of the job left time in the winter to begin volunteering at the MCC Thrift Store.  It soon became apparent that Jack’s skills were best employed in the back making repairs.

When first coming to Lethbridge they found a wonderful church home at Bethany Baptist. They made some very dear friends there and were saddened as membership dwindled unto the point that the church had to disband.  They then made the choice to join the Coaldale Mennonite church in June of 2000.  Here, too, they have made some dear friends and participated wherever they were able.

In 2015, due to the continuing onslaught of Parkinson’s it was deemed necessary that Jack be in a senior’s lodge so as to better manage his care. So, after some shuffling through the system, Jack and Lena moved to the Sunny South Lodge. The warm, caring staff did their best to make a less than ideal situation as pleasant as possible and the family is grateful.

A Memorial Service will be held at 2:00pm on Friday, December 2, 2016 at the COALDALE MENNONITE CHURCH.