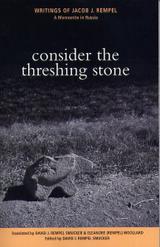 From 1023 to 1924 Rempel (1886 – 1980) served as chairman of the Molotschna Emigration Committee, which helped to organize thousands of Mennonite in the Soviet Union as they fled anarchy, famine, and Soviet Communism. In this translation of his autobiographical writings, he covers his life in Russia from his childhood to his 1924 emigration to Canada.

He describes his years of alternative service as a medic on a hospital ship on the Black Sea during World War l. He recounts the impact of the Bolshevik Revolution and ensuing anarchy during which five relatives of his first wife were murdered by bandits. This chaos transformed his family into refugees within his native land, and increased the misery of the crushing famine during which he lost three immediate family members to disease. He finally gives an account of the complex process of emigration in which he performed some crucial roles.

Rempel saw himself as a witness to God’s mighty acts. He was simply astonished with gratitude that God had preserved him through tribulations and had led many of his people to Canada, in the same way that God had led the Israelites to the Promised Land. The book includes an index and two genealogical outlines. These help to locate and relate the various places and persons in Rempel’s writings, as well as provide a list of his descendants.