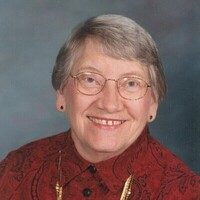 Anna (Anne) Braun of Brooks, passed away in Brooks on Wednesday, May 27, 2020 at the age of 88 years.  Anne was born on January 3, 1932 at her parent’s home in Hussar, Alberta.  She was the youngest child born to Johann and Susanna Braun (nee Geddert).  In the winter of 1936, the Braun family moved from Hussar to Gem, Alberta.  Anne grew up on the family farm and attended Gem School.  At age 13, Anne became a Christian and was baptized in 1951 in the Gem Mennonite Brethren Church.  As a child, Anne suffered from a bone infection in her ankle.  As a result, she endured many surgeries and long hospital stays to correct the effects of the uneven growth in her leg.  She always walked with a slight limp and wore specially designed shoes with one heel being much higher than the other.  After completing high school, Anne moved to Calgary.  She attended Henderson Business College and secured a job at Ingram and Bell, a medical supply company for 11 years.  Later, she was hired as an accounting clerk by the Calgary District Hospital Group which included the Colonel Belcher, Holy Cross, and Rockyview Hospitals.  She worked there for 20 years before taking early retirement in 1993.  Anne enjoyed traveling and over the years she visited Europe, Alaska, Hawaii, California, and New York.  Many summers were spent at Fairmont Hot Springs, as well as visiting family and friends.  In addition to traveling, Anne’s leisure time was spent sewing, knitting, crocheting, quilting and crafting.  She was very talented and many friends and family received beautiful gifts from her handiwork.  She had a special place in her heart for Mennonite Central Committee and over the years sewed countless school kit bags and helped with making quilts for those in need.  She also spent many a happy hour engrossed in a good book or putting together a jigsaw puzzle.  Extended family was especially important to Anne and she was close to her nieces and nephews attending most of their graduations and weddings and delighting in each new baby that came into the family.  In 2005, Anne moved to Linden, Alberta, where she made many friends and especially enjoyed those who were part of the MCC quilt making gatherings.  In April of 2013, Anne moved to Newbrook Lodge in Brooks to be closer to family in the area and then to Sunrise Gardens.  Special thanks to all the staff at Sunrise Gardens for the kind and compassionate care shown to our Aunt Anne over the past 5 years.  Anne is predeceased by her parents, brother John and his wife Rose, sister Katherine and her husband Dave Klassen, brother Frank and his wife Agnes, 1 sister and 3 brothers in infancy, and nephew Gary Klassen.  Anne is survived by her brother Dirk and his wife Peggy, and nieces and nephews: Judy Steinke, Betty Wiehler, David Klassen, Susan Neufeld, Ralph Klassen, Janice Juneau, Erwin Braun, Ray Braun, Carol Reid, Harold Braun, Lorna Retzlaff, Gail Amendt, and Andrew Braun. A private Family Graveside will be held from the Gem Cemetery. Rev. Lorne Willms officiating.