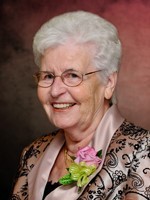 Hildegard Boldt beloved wife of Gerhard of Calgary, for over 53 years, passed away on February 18, 2010 at the age of 74 years. She went to be with her Lord and Saviour surrounded by her family.

During her brief battle with cancer she held our hands and guided us through this final journey with tremendous grace.

Our most heartfelt thanks go to Unit 32 at Foothills Hospital and all of the staff and volunteers at the Rosedale Hospice who provided the loving care to not only Hilde but also to her whole family.