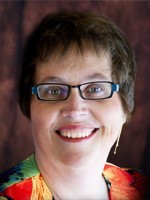 Paul wrote: “For to me, to live is Christ and to die is gain.”(Philippians 1:21) This verse sums up the life of Joyce Hope Anquist. There is no doubt that her love for her Lord and Saviour Jesus Christ was the driving force throughout her life. Joyce grew up in Brooks, AB and attended Hillcrest Christian College in Medicine Hat, AB. It is there that she met Kendell E. Anquist, and the two fell in love. They dedicated themselves to God and each other in marriage on December 27, 1980. They ministered in Kelowna, BC before moving to Calgary where they were blessed with three beautiful gifts from God. Early on June 23, 2011, Joyce was welcomed into the arms of Jesus and was reunited with her sister Fern, her mother Mary and her dad Abram. Those of us left behind are, Kendell, her husband and best friend of thirty years; children Stephen (and Carlin), Mary (and Munier Nour), and Daniel, as well as grandson Elias Nour. Joyce also leaves her three remaining sisters and brother along with their families.

The family, along with many others that Joyce impacted will be celebrating her life in the Worship Centre at Centre Street Church “Central Campus” (3900 – 2nd Street N.E.) on Thursday, June 30, 2011 at 1:00 p.m.

The family is asking that in lieu of flowers that you make contributions to one of two groups that they as a family feel strongly about: Japan Relief Samaritan’s Purse, 20 Hopewell Way NW Calgary, AB T3J 5H5 or STOP human trafficking Humanitarian Aid Response Teams (HART), 317 – 37 Ave. NE, Suite 200 Calgary, AB T2E 6P6.