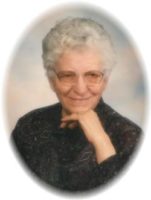 Mrs. Justina Martha (Friesen) Janzen formerly of Rosemary, beloved wife of the late Peter Janzen, passed away in Brooks on Wednesday, April 15th, 2015 at the age of 94 years. Justina was the 2nd daughter born to Bernard and Katharina (Boschman) Friesen January 28th, 1921. She grew up in a large family consisting of 4 girls and 3 boys. Justina’s mother passed away when Justina was a young adult. Soon after her father remarried and his wife, Mary Miller brought her 2 children into this family. In due course this family was to grow further as Mary and Bernard had 4 more daughters. This farm family of 13 children grew up in the Eigenheim District, several miles west of Rosthern, Saskatchewan. Justina attended a one room country school house up to grade 8. Later she attended Rosthern Bible School. Soon after Justina commenced working at the Mennonite Youth Farm as an Administrator and she enjoyed the kinship of her work collegues a lot, as she held this position for about 15 years. Following her Youth Farm career, Justina began working for a doctor in North Battleford, Saskatchewan, whose wife had passed away and needed assistance with a very young family. It was during her stay in North Battleford that fate would soon come calling. In December of 1957, Peter H. Janzen’s wife Agnes passed away leaving 3 young sons for Peter to care for,along with all his farming activities. Eventhough Peter had the wonderful assistance of community, family and great housekeepers, now called nannies, he was soon introduced to Justina by his brother, Jack, who lived in Rosthern and learned to know Justina through his work as a doctor, assisting many patients at the Mennonite Youth Farm.

Peter and Justina married on April 11th, 1958 and Justina instantly became a Mom to Bill, Bob and Andrew. In July of 1959, daughter Karen, a sister to the boys. Life on the farm, with 4 young kids was a challenge, however Justina managed to become a member of the community of Rosemary and the Rosemary Mennonite Church.

In addition, she enjoyed her hobbies when she had time. Gardening was a passion that she enjoyed a lot, right up to the time she chose to leave the villa next to the church in Rosemary and move into the Lodge in Brooks. After only a short stay at the Lodge, it became evident that Justina needed more assistance due to her dementia and at this point she took up residence at Sunrise Gardens. She was blessed to be near her home community of Rosemary and to have the many friends who would stop by for a short visit or cup of coffee. Justina would often comment that she enjoyed her many visitors. Within a couple of years, her illness gradually became more debilitating and on April 15th, 2015 she passed away and entered the Heavenly Kingdom, where she will enjoy eternity and all those who passed before her.

Justina leaves to mourn, her daughter Karen (Patrick) and their sons Joel, Paul and Neil; her sons Andrew (Donna) and their children, Matthew (Marianne), Susan (Jason) and Thomas; Bob (Kate) and their children Rachel (Chris), Rebekah (Khris) and Joshua (Jenny); Bill (Charlette) and their children, Pamela (Nader), Brad (Colleen) and Morgan. Also, morning the loss are great grand children, Madison, Kylea, Garrett, Brooklynn, Quinlan, Griffin, Lucy, Emmett, Jack, Tyson, Gracelynn and Colby. Although a number of Justina’s siblings and their spouses have passed on, mourning Justina’s passing are her brothers Walter, Ervin, Jonathan and step brother Abe and their respective spouses and families. As well, sisters Hedie, Delores, Mabel and Naomi and their respective spouses and families. A Celebration of Justina’s Life will be held on Tuesday, April 21st at 2:00 PM from the Rosemary Mennonite Church. Rev. Jake Unrau officiating. Interment to follow at Rosemary Cemetery.